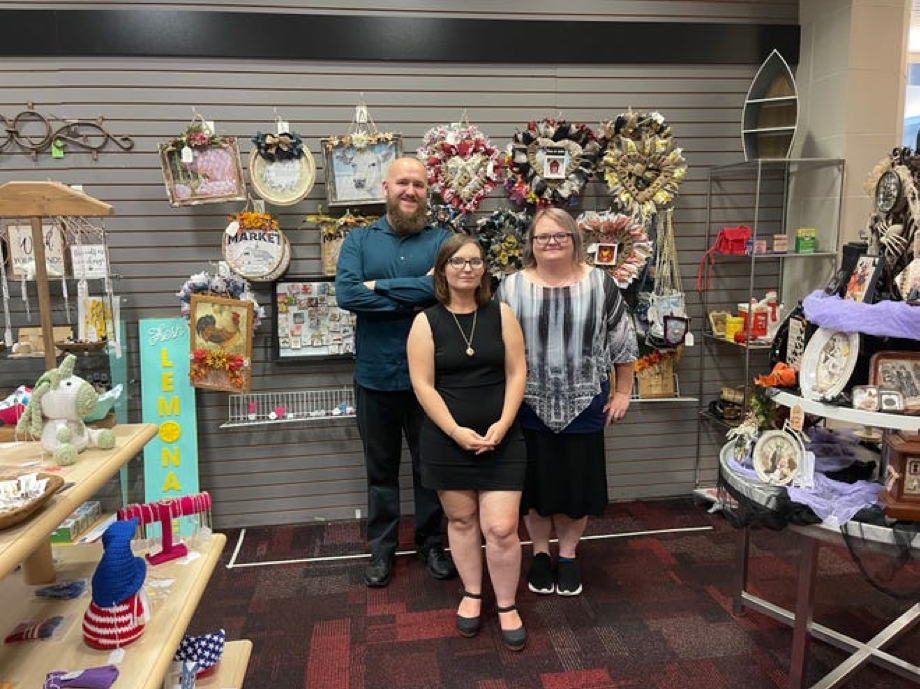 When Ann Craig returned to her hometown of Monroe after years of being away, she was struck by the vacant storefronts in the mall.

The 29-year-old, 2010 Jefferson High School graduate said the shopping center had once been the central hangout spot for local teens.

So when looking for a place for her business, Craig said the space at the Mall of Monroe was affordable and more important, she wanted to help contribute to the venue’s revitalization.

“I figured the space would be perfect and I want to help bring life back to the mall,” Craig said.

Flashback serves as a retail space that curates and manages vendors who contract with Craig’s business.

Currently, the business has about 25 vendors who rent out space at Flashback to display their goods.

Collecting booth fees, Craig and her team manage the sale of goods and vendors’ inventory. For an additional fee, vendors are also able to drop off their merchandise, and Craig and Flashback employees tag, price and handle the marketing of the products.

“Vendors can just style and sell their crafts, antiques and handmade items … and we handle the complicated stuff,” Craig said. “Vendors can have the fun part of just setting their stuff up and handle the rest — they can just sit back and relax. It’s great for (vendors) who work typical jobs with longer hours.”

For those with smaller collections or just a few things to sell, Craig said her shop has a consignment model. The commission is a little higher, but her employees handle everything after the item is dropped off.

Craig said much of her business is guided by an old saying: Grandma gave it to your mother, your mother gave it away, and I bought it back. Learn more

Craig’s love of unique items began in her childhood. Her father was a scrapper, and she’d often accompany him around town as he worked.

“I would always be interested in the things people would have lying around and what they wanted to get rid of,” she said.

Craig said she saw a market for recycled and used goods. She had previously planned to launch an event company modeled much like a traditional dating service.

But the COVID-19 pandemic and subsequent regulations limiting social gatherings prompted the young mother to pivot.

An entrepreneur, she said she’d often sell things online on popular resale sites, such as eBay, Poshmark and Mercari. Noticing that the resale market was continuing to grow, she also was surprised by how many people wanted to sell things, but were hesitant to do so because they didn’t have the space for such a business.

Inspired to combine her experience in marketing and love of business, she conceived the idea for Flashback.

“I knew there were a lot of vendors out there who wanted to sell,” Craig said. “… I help them build up their business.”

Craig said she has been pleasantly surprised by how quickly her business has grown, as well as the shifting demographic of the store’s customers.

The target audience originally had been women age 35 to 60 who were looking for thoughtful gifts or unique home decor. But Craig said she has seen a more eco-conscience generation of customers begin to come through the shop, who have exhibited a keen interest in vintage clothing and records.

“If you are buying older, well-preserved things, you are helping to save the environment,” Craig said. “You cut down the cost of labor and materials that go into producing (more goods).”

The store also handles selling some of the vendors’ items online, too. And it plans to grow, Craig said, adding she is eyeing moving into a larger space in the mall by the end of the year.

Such a move would enable the store to display furniture pieces and larger home decor items, she said.

“I really want to create a space where people can sell things, providing an umbrella-type resale store that has a bunch of different items,” Craig said. “I want to be able to provide a physical location for people like me who would rather go and physically touch and see something before they buy it.”