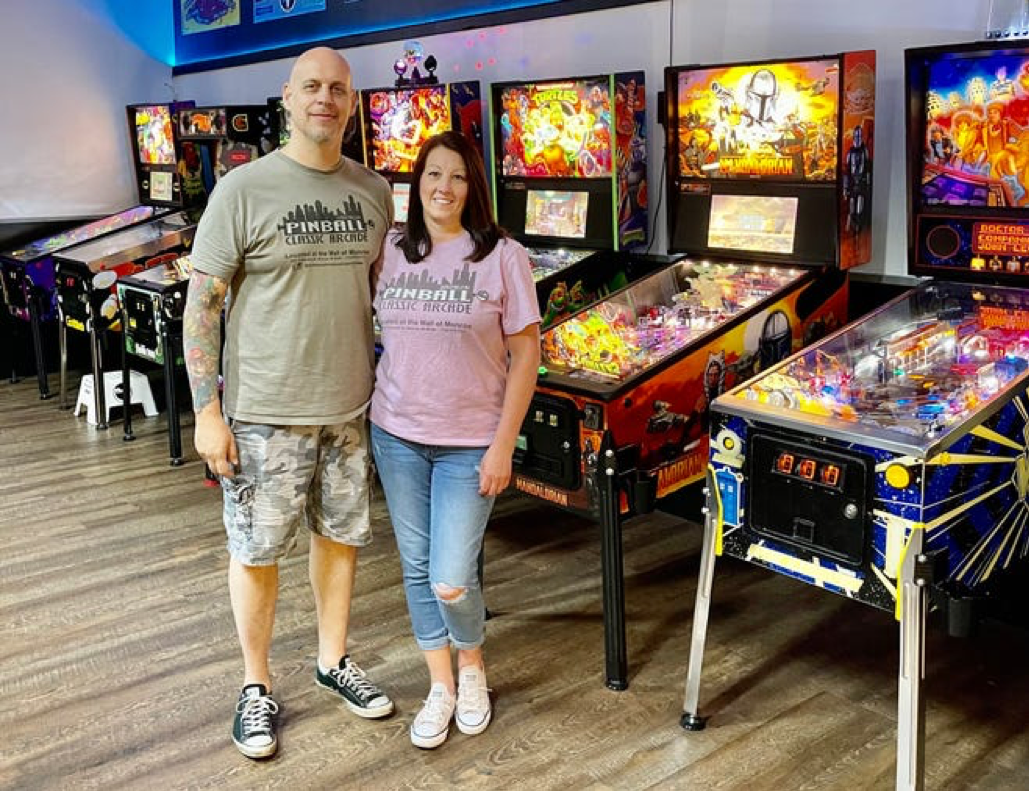 When playing an arcade game, David DeSloover Jr. said there is a code players can almost crack in pursuit of beating their previous score.

But when it comes to pinball, there is a level of skill needed as each game is unique within itself.

“You can learn all the rules behind a pinball machine, but because you don’t know where that ball is going, there is skill (needed) for each game,” David said. “Every single game is different. That’s what’s so exciting about pinball.”

David and his wife, Leeann DeSloover, are the owners of ULEKstore’s Pinball and Classic Arcade.

The couple that has been married for 30 years recently opened the venue at the Mall of Monroe, debuting a destination that houses dozens of pinball machines and arcade games.

Marked by sounds and lights unique to an arcade, the business features machines modeled after various pop culture staples, including Star Wars, X-Men and Dr. Who.

The arcade’s name is inspired by the family’s business: ULEK, which is short for Unique Laser and Engraving Keepsakes, Inc., which also sells pinball mods and arcade parts.

The DeSloovers grew up playing pinball and have been longtime gaming collectors. As pinball and arcade games have experienced a resurgence in popularity in recent years, they were inspired to bring a new destination to their hometown.

“Pinball kind of disappeared for a good ten, twenty years,” David said. “… We decided the community was lacking in places where families could go, and that’s kind of how this idea came about.”

For years, the DeSloovers had been kicking around the idea of opening an arcade to more widely share their passion for pinball. They had previously been in contact with members of the Mall of Monroe’s management team about occupying vacant space in the retail center.

When the management team reached out again this year, mall representatives expressed a desire to draw more traffic and enterprise to the property, especially as life returned to a semblance of normal following COVID-19 restrictions.

While the idea of opening a venue on the tail of a pandemic was terrifying, the DeSloovers said they still wanted to proceed, particularly since it had been a years-long choice in the making.

“We knew we didn’t want too large of a space,” David said. “It all just kind of came together at the right time. … (Mall management) called and said, ‘We want to get the mall going again.’ They told us we would be a perfect fit.”

As more people received vaccinations and restrictions were lifted, the DeSloovers said they recognized that like them, many people were eager to return to social interactions. It took the couple about two months to get the new venture up and running.

“We were dying to go out and see people, even though we have pinball machines at home,” David said. “We like to socialize. We crossed our fingers and said a lot of prayers, hoping the pandemic had run its course and folks could go out again.”

Leeann highlights that the arcade is a great place for families to go, which is something the DeSloovers think can benefit the community.

“There isn’t a lot in the community that caters to kids,” she said. “Hopefully, this is something families will see as something for kids to do.”

The staff cleans and sanitizes the machines regularly. Leeann said there are enough machines for people to social distance if that makes them feel more comfortable.

“You can keep your distance and enjoy yourself,” she added.

Leeann said they also have ten machines that are housed at Beeks Bar & Grille in downtown Monroe.

David said the arcade’s offerings are constantly rotating, swapping out older titles for new ones. The business also buys and sells machines, often restoring them. With a dedicated physical space, David said he hopes to keep such games available locally.

“Once we restore machines, instead of selling them we would like to put them back into the community,” he added.

Leeann’s favorite machine is the Dr. Who game. David’s favorite is the pinball machine America’s Most Haunted, which is the newest in the DeSloovers’ collection.

He and Leeann acquired the game from a basement, where it was rusted and in disrepair. It’s a relatively unique game, David said, adding that only about 150 exist worldwide.

“We spent a lot of time and money and effort getting that machine back together,” he said. “Now it sits right next to a new pinball machine and you can’t even tell the difference (in their age). … The playfield on it is amazing. It looks better than something like Star Wars or Iron Maiden.”

It’s such an experience and game that fuels his love for pinball.

“It’s so fast and furious and the call-outs are great,” David said. “I keep wanting to do one more game — I just want to get to that final mode. That’s why I enjoy pinball so much.”

David said he wants the arcade to be interactive and reflective of the community. He encourages customers to reach out and let the DeSloovers know what titles interest them.

The response the arcade has received so far has been heartening, the DeSloovers said. Players have travelled from across the region and even visited from out of state. David said the pinball machine community is a dedicated one.

“The pinball community is one of those communities that when you share things online, there is a lot of excitement around it,” he said. “… Because we are so enthusiastic about pinball and arcade games, when you see families come in and enjoy time together, there is nothing better than that. … We’ve had people say this is like their own personal game room.”

Leeann said the business hosts tournaments every other Saturday, which draws up to 30 or 40 people. They also plan to start a pinball league for area youth, serving kids ages 5 to 13, later this year.

“After working all day, you can come in and take your mind off work and normal every day life,” Leeann said.

For more information, check out ULEKstore’s Pinball and Classic Arcade on Facebook or Ulekstore.com.